How can we help you?

How can I trial BioVinci?

When downloading BioVinci software at https://vinci.bioturing.com/feature, users will automatically have 15 trial days.

Which features are restricted under the trial version?

Under the trial version, users can use full analytics and visualization features of BioVinci, but this version does not support export visualization results without the BioVinci watermark.

How can I purchase BioVinci?

You can find detail information about the price and purchase BioVinci on the website: https://vinci.bioturing.com/pricing

What types of input data are supported by BioVinci?

What types of files can be exported from BioVinci?

Why do we need normalization?

BioVinci uses normalization for removing influences of confounding factors that lead to the differences among samples in input data. Normalization is the process of scaling individual samples to have unit norm.

How does normalization work?

We use the L2 norm as the default parameter and L1 norm as an optional parameter.

The normalized data have unit norm (L2) for each sample (row vector).

Why do we need standardization?

Many machine learning algorithms assume that all features are centered around zero and have variance in the same order to avoid features with high variances can affect the accuracy of the estimated result. Standardization can be used when features have many different levels of variance.

What is the difference between normalization and standardization?

Meanwhile, standardization calculates the mean u and the standard deviation s of each feature (column vector) and transforms the values in each column to \({{x-u} \over s}\).

BioVinci 2.0 set normalization as a default parameter for preprocessing some types of data as single-cell RNA, bulk RNA, miRNA expression... For other data types, we suggest using standardization when features have many different levels of variance. On the other hand, if you like to remove the influences of confounding factors that lead to the differences among samples in your input data, the normalization is more suitable.

Why do we need dimensionality reduction in bioinformatics?

One challenge of bioinformatics is developing effective ways to analyze high dimensional data and find structures of the data. Dimensionality reduction methods are powerful tools for finding important features of input data and getting insights into our data. These methods can also help to visualize the high-dimensional data.

What are the criteria BioVinci chooses to compare the level of fitness with the label of the data?

BioVinci will suggest the fittest dimensionality reduction methods correspond to this label. The criteria we choose to compare the level of fitness with the label is the Silhouette score. Silhouette refers to a method of interpretation and validation of consistency within clusters of data. The silhouette value is a measure of how similar a sample is to its own cluster (cohesion) compared to other clusters (separation). The silhouette ranges from −1 to +1, where a high value indicates that the object is well matched to its own cluster and poorly matched to neighboring clusters. If most objects have a high value, then the clustering configuration is appropriate. If many points have a low or negative value, then the clustering configuration may have too many or too few clusters.

Mathematically, PCA defines a new orthogonal coordinate system that optimally describes the variance in a dataset.

BioVinci uses sklearn.decomposition to do PCA by singular value decomposition (SVD). This method decomposes the input data X using SVD and computes sorted eigenvalues of the covariance matrix. In scikit-learn, PCA centers but does not scale the input data for each feature before applying the SVD.

Principal component: Given a collection of points in two, three, or higher-dimensional space, a "best fitting" line can be defined as one that minimizes the average squared distance from a point to the line. The next best-fitting line can be similarly chosen from directions perpendicular to the first. Repeating this process yields an orthogonal basis in which different individual dimensions of the data are uncorrelated. These basis vectors are called principal components, and several related procedures principal component analysis (PCA). 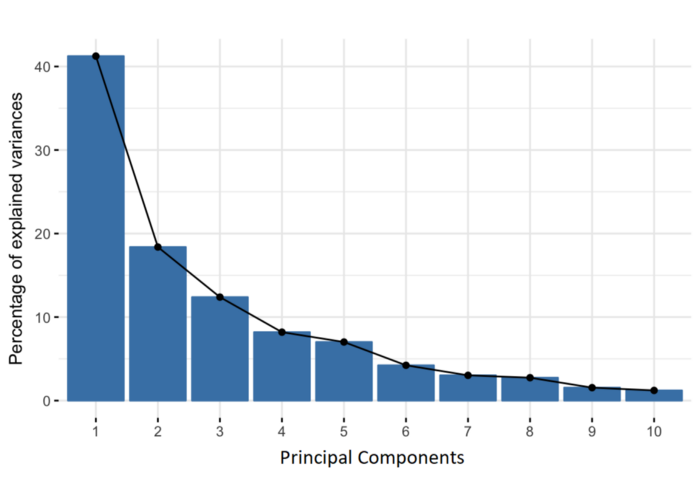 What are the differences between SVD solver options?

BioVinci uses sklearn.decomposition.PCA for implementing principal components analysis. There are some differences between SVD solver options:
X is input data. The default parameter of SVD solver is “auto”.

Auto: If the input data is larger than 500x500 and the number of components to extract is lower than 80% of the smallest dimension of the data, then the more efficient ‘randomized’ method is enabled. Otherwise the exact full SVD is computed and optionally truncated afterwards.

Randomized: Run randomized SVD by the method of Halko et al, 2009. This paper presents a modular framework for constructing randomized algorithms that compute partial matrix decompositions. These methods use random sampling to identify a subspace that captures most of the action of a matrix. The input matrix is then compressed - either explicitly or implicitly - to this subspace, and the reduced matrix is manipulated deterministically to obtain the desired low-rank factorization. In many cases, this approach beats its classical competitors in terms of accuracy, speed, and robustness.

Why do we need non-linear dimensionality reduction?

The geodesic distances (shortest path) of two points can be different from their straight-line Euclidean distance in high-dimensional input space. The geodesic distances reflect the true low-dimensional geometry of the manifold, but some linear dimensionality reduction methods as PCA and MDS effectively see just the Euclidean structure; thus, they fail to detect the intrinsic distance (Tenenbaum et al., 2000). So this is the reason we integrated non-linear dimension reduction algorithms into our application.

What are the parameters of t-SNE?

Early exaggeration factor: During the early exaggeration, the joint probabilities in the original space will be artificially increased by multiplication with a given factor. Larger factors result in larger gaps between natural clusters in the data. If the factor is too high, the KL divergence could increase during this phase.

Learning rate: If it is too low, gradient descent will get stuck in a bad local minimum. If it is too high, the KL divergence will increase during optimization.

The maximum number of iterations

Angle (not used in the exact method): Larger angles imply that we can approximate larger regions by a single point, leading to better speed but less accurate results.

How does ISOMAP work?

Isomap is used for computing a quasi-isometric, low-dimensional embedding of a set of high-dimensional data points. Quasi-isometry is a function between two metric spaces. ISOMAP constructs a neighborhood graph and computes the shortest path between two nodes in this graph. This is a k-neighbour based graph learning algorithm.

A high-level description of the ISOMAP algorithm:

How does UMAP work?

From a theoretical perspective, UMAP finds the best low dimensional representation to have a similar fuzzy topological structure of high dimensional input space. From a practical computational perspective, UMAP can be described as a graph problem. As with other k-neighbor graph-based algorithms, UMAP can be described in two phases. In the first phase, a particular weighted k-neighbor graph is constructed. In the second phase, a low dimensional layout of this graph is computed.

What is the difference between ISOMAP and UMAP?

ISOMAP was built on classical MDS but it preserves the intrinsic geometry of the data, as captured in the geodesic manifold distances between all pairs of data points. We use ISOMAP as a non-linear method that is closest to linear dimension reduction methods.

From a practical computational perspective, UMAP can be described as a graph problem. In particular, it belongs to the class of k-neighbour based graph learning algorithms such as Laplacian Eigenmaps, Isomap, and t-SNE. The differences between all algorithms in this class amount to specific details in how the graph is constructed and how the layout is computed (McInnes et al., 2018).

What is the difference between tSNE and UMAP?

The most important difference between UMAP and t-SNE is the how-to compute the loss function.

What does the decision tree model do?

The decision tree model is used to define important features that distinguish a cluster from the whole of the population.

What is the difference between the Gini and entropy?

These are criteria as the function to measure the quality of a split. Supported criteria are “Gini” for the Gini impurity and “entropy” for the information gain.

Gini impurity:
The Gini impurity measure is one of the methods used in decision tree algorithms to decide the optimal split from a node. Gini Impurity tells us what is the probability of misclassifying an observation. The lower the Gini the better the split. In other words the lower the likelihood of misclassification.

Information gain:
In information theory, the entropy can be interpreted as the average level of "information" or "uncertainty" inherent in the variable's possible outcomes. Given a random variable X, with possible outcomes x_i:$$H(X)=-\sum_{i=1}^n p(x_i)logp(x_i)$$

The conditional entropy (or equivocation) quantifies the amount of information needed to describe the outcome of a random variable Y given that the value of another random variable X is known.

In general terms, the expected information gain is the change in information entropy Η from a prior state to a state that takes some information as given: $$IG(T,a)=H(T) - H(T|a)$$ where \(H(T|a)\) is the conditional entropy of \(T\) given the value of attribute \(a\).

In the decision tree model, information gain of change state from a parent node to all its children is a criterion for splitting.

Gini impurity and information gain can make different splitting in the decision tree model, you can compare the results and choose your suitable criteria for your dataset.

How can I become a partner of BioVinci?

To bring the latest advancements in computer science and mathematics to life science, we can not work alone. BioVinci is open to partner with leading research institutions. If you want to adopt BioVinci in your research institute, please send us an email at vinci@bioturing.com.

Cluster analysis (clustering): is the task of grouping a set of objects in such a way that objects in the same group (called a cluster) are more similar (in some sense) to each other than to those in other groups (clusters).

A ranking: is a relationship between a set of items such that, for any two items, the first is either 'ranked higher than', 'ranked lower than' or 'ranked equal to' the second.

Principal component analysis: Given a collection of points in two, three, or higher-dimensional space, a "best fitting" line can be defined as one that minimizes the average squared distance from a point to the line. The next best-fitting line can be similarly chosen from directions perpendicular to the first. Repeating this process yields an orthogonal basis in which different individual dimensions of the data are uncorrelated. These basis vectors are called principal components, and several related procedures principal component analysis (PCA).

Singular value decomposition: is a factorization of a real or complex matrix.

Correlation or dependence: is any statistical relationship, whether causal or not, between two random variables or bivariate data.

Classification: is the problem of identifying to which of a set of categories (sub-populations) a new observation belongs, on the basis of a training set of data containing observations (or instances) whose category membership is known.

Kernel method: is a class of algorithms for pattern analysis, whose best-known member is the support vector machine (SVM). The general task of pattern analysis is to find and study general types of relations (for example clusters, rankings, principal components, correlations, classifications) in datasets.